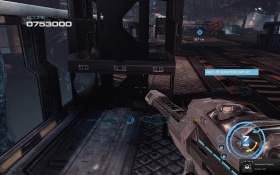 The R21-B Sniper Rifle is a powerful, long range weapon for the more elegant killers among us. As one would expect, it is equipped with a powerful scope. It is also able to take down Warriors, Grunts, and Grenadiers in one shot in most cases. The downside is low shots-per-second. Unlike the sniper rifles in many games this one retains its accuracy when firing from the hip so it is still useful at close range. Ammunition for it is fairly rare.

First encountered in the level Destruction.

A powerful and instant explosive shot that little can withstand.