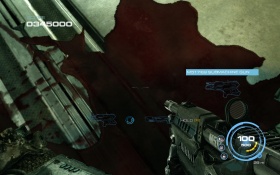 The M517/69 Sub-Machine Gun is a fast firing but inaccurate alternative to an assault rifle. While lacking the stopping power of the the assault rifle or even the ion rifle, in close range it makes up for it in sheer damage-per-second. 100 shot magazine, 300 shot reserve.

First encountered in the level Destruction.

An electrical grenade blast that incapacitates enemies if it doesn't outright kill them. Recommend following up with bullets.