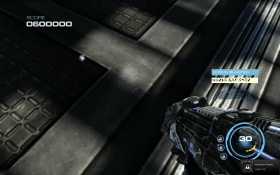 The Vorus Blaster is an energy shotgun. Not much more to say. Good for close range, horrible for longer ranges. There is no obvious difference in damage between this and the Combat Shotgun. Either will kill all normal enemies with one blast at close range. Indeed one shot can take out more than one enemy on easier difficulties. The Blaster is probably the better choice because it doesn't require reloading and ammunition is plentiful from enemy drops. you can get many easy kills by hiding behind cover and equipping a blaster or shotgun then pop the Vorus as they poke their heads around the corner.

First found after the first encounter with the Grunt enemy.

The blaster fires a large force explosion that throws enemies around, but doesn't outright kill them usually.